“Hey…Rachael….” I was facing my computer screen and turned toward the voice behind me in time to see Chris Little (Princeton University) brush a large, floppy, black, faux fur dog ear out of his face while he flamboyantly swished his head (and head piece) in the opposite direction. Chris was unveiling a very becoming new look; I couldn’t help but laugh. Was this the same person who gave a serious talk on modeling just the day before??? Over the next couple of hours, Chris played up the dog ears as a funny look to contrast his “business as usual” actions. From identifying CTD water sample depths to sampling the water for Brice’s Ph.D. research and shaking off the sub-freezing water temperature in order to run samples through a nutrient analyzer, Chris is heavily involved in the science tasks on board; yet he still seems to make room for entertainment.

The dog eared display was already a couple of days ago, but it is good testimony of Chris’ character, which combines serious work with a healthy dose of playfulness.

Chris’ Ph.D. topic is very similar to mine, i.e. studying the interaction between ice shelves and oceans through the use of ocean models. The difference in our paths emerges through the details of our work: My Ph.D. will make use of satellite observations and regional ocean models (e.g. the area around an ice shelf) to investigate how different types of mixing affect the amount of warm water that can contact an ice shelf base and influence the degree to which the base melts; Chris’ Ph.D. uses a different kind of model in order to help bring science one step closer to including ice shelf interactions in global climate models. He has added an ice shelf component to an ocean model used in the climate modeling community and aims to test the model by applying it to the region in which we have spent the past few weeks sampling, namely Pine Island Bay. In spite of the fact that our Ph.D.s will use different tools and will have different focuses, we are both addressing the same problem of trying to better define how ice shelves may change in the future.

Like anything else, the complexity of modeling ice shelf and ocean interactions comes in layers. The outer most shell is a simple idea: Warm water melts the ice shelf base while cold water freezes to the ice shelf base. Just beneath the surface of this concept is a sea of complications, including the fact that both salt and pressure affect the freezing point of water. Hence, warm ocean water may melt the ice shelf base at one depth but not at a different depth or, similarly, at one salinity layer but not at another. If the ocean melts the ice shelf base and becomes less salty, this change in density could make is lighter than the surrounding water, causing the water to buoyantly rise to a pressure at which it may be inclined to freeze again. Add to this the competing influence that the ice shelf is also cooling the water and this cooling has the opposite effect as the decrease in salinity (i.e. colder water is denser than warmer water). Furthermore, this list of details all relates to the ocean, and you may wonder: What about changes in the ice shelf? After all, beyond melting or freezing, the ice shelf is also influenced by the ocean. For example, the ice shelf can absorb the ocean’s heat without melting, which makes it warmer at the ocean interface than it is at the surface, air interface. In short, both ice shelf and ocean dynamics contribute their own set of challenges, the details of which span beyond my explanation.

Suffice to say that the simplicity of “warm water melts ice” can become complicated by the pros and cons of expressing the intricacies of nature in various mathematical formulae. Upon a closer look, the similarity between our two projects rapidly dissolves into a quagmire of details that will need the triumph of many minds to sort out. On this cruise, we are only two pieces of a much larger puzzle, bringing our ideas together to try and help each other with our respective pieces of the puzzle.

Perhaps needless to say, I have really enjoyed having another modeler onboard with which to talk, especially someone like Chris who is very expressive of his opinion and easily fuels discussion. He is also further along in his studies than I am in mine, so as different questions arise he has directed me to particular articles to help fuel discussion. In turn, I have offered insights gained from my background in mixing.

Of course, our science chats are in balance with the other activities on board. The daily routine of CTD stations, sampling, and ice observations continue. This morning, we completed the stations along the shelf break and we are transiting on towards the next series of stations. Stan has decided against sampling in the Bellingshausen Sea, leaving that endeavor to colleagues on the British R.V. James Clark Ross. In the time we have left, it seems that we will accomplish more by moving South again, towards the Abbot Ice Shelf, taking a series of CTD stations that will close off the western entrance to Pine Island Bay continental shelf region.

As part of this plan, we are moving deeper into the sea ice. Sunshine has finally punched through the clouds of the past few days. We find ourselves surrounded by all shapes and sizes of icebergs that are disconnected by a surface of flat floes, stitched together by brash ice that is colored brown by algae. In my last sea ice observation, I estimated a minimum of forty icebergs in a six nautical mile radius. In the morning light, the surrounding blue-grey bergs rimmed with a glistening sheen that was further accentuated by a dark grey, cloudy backdrop. Crabeater seals, clearly the dominant seal population in this area, basked in the sun on the floes, and I think we all join in the hope of keeping company with the sunshine for a few more days. 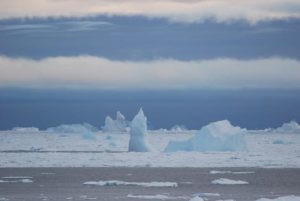 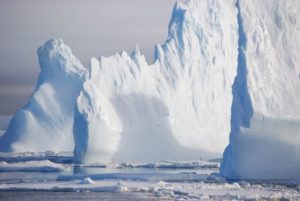