We are still motoring through grey skies and iceberg laden seas along the shelf break, where the continental shelf gives way to deeper seas. The CTD stations are spaced more apart, allowing time for other work. Over the past few days, I have busied myself with the prediction of regional tides, running a model with more updated ocean floor bathymetry in order to deduce where along the shelf break the tides may be most active and where it will be best to sample. Others are already busy preparing for the arrival at Puntas Arenas, Chile. The end of the cruise seems to have appeared on the horizon of everyone’s thoughts as the summary report is already in the making. 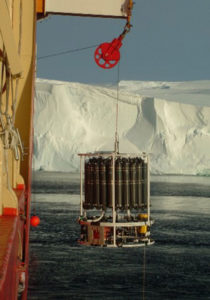 The scenic excitement of the day was around 7:00 (ship time). I went up to the bridge to observe and record the sea ice (one of my daily routines) and was welcomed by a beautiful iceberg. I was early for my observation, so I had time to dash outside for a photo. While I was out there, I spotted a new bird, which I later identified as an Antarctic Fulmar. When I returned inside to continue recording seaice observations, I kept noticing an unusual amount of Crabeater seals on the floes (20-100m wide), so I stayed on the bridge for a little bit after finishing by seaice observation to continue with seaice critter observations. I ended up seeing more Crabeaters, several Adelie penguins, snow petrels, and at least three Minke Whales. What a biological hot spot! We go through long stretches of not seeing anything and then we stumble upon an area of rich diversity. While I can not say whether it was a fleeting concentration of species or a gathering sustained by reliable circulation patterns, it seemed clear to me that the eating must be good there, and I appreciated being a witness. 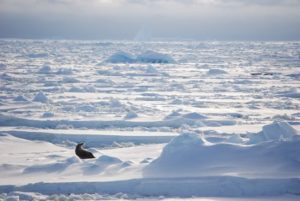 The biology extravaganza was around 72S and 118.3W. Four hours later, around 71.6S and 116.5W, the third level conference room offered more eye candy as we gathered for a slide presentation by Ali Criscitiello. Having led various expeditions for science or forest service work in the northwest, Ali had some amazing photos to share on the glaciated landscapes of Washington and Alaska. When the presentation ended, we all just sat there as if to say…can we have more???

As for now, my bunk on the first deck is calling my name quite clearly; it’s time to rest up for another day!

Good night and until next time…

p.s. Birders…I forgot to mention the Antarctic Tern that I saw last week. At least, I’m 95% sure that it was an Antarctic Tern. I would be 100% sure if someone could tell me that all the Arctic Terns have already headed north!