Yesterday morning, wearing hard hats and orange “float coats”, my watch mates and I gathered on deck to help with sampling. We were greeted with colors that were not dazzling or strong but subtle: pastels painted behind pillows of clouds and above a textured landscape of snow and ice. It was the kind of daybreak when the darkness of night gives softly to day. The clouds hung around like decorations that were highlighted with the changing tones instead of masking the transition.

While some watches go by with a rhythm of routine, others are broken into unique moments, like that one. We have had a couple such moments in the past forty eight hours. After that experience on deck, the sun continued to stream through the clouds, over the course of the day. By the end of our watch, the ship hove to aside another raft of ice in order to deploy the second ice buoy and to collect more ice cores. I didn’t help on this occasion, so that others could have the chance to participate, but I appreciated the experience nonetheless.

The ice buoy was put in place, much like the last time, and the party in charge of the ice buoy returned to the ship first, leaving behind those who were extracting ice cores. While finishing their work, the ice corers were joined by a couple of curious Adelie penguins. The penguins didn’t get too close, but they were close enough that their company was enjoyed. At one point, Brice started to run back towards the ship, and I saw one of the penguins run after him! It seems that they enjoyed the company too.

The afternoon progressed in a typical fashion (work out, eat, sleep), and I awoke in darkness-which is now more pronounced-to start my next watch. Within a couple of hours (9:00 GMT), the bridge called down to the dry lab: Aurora Australis, off the port side! It was my first opportunity to see any kind of Aurora (Borealis or Autralis), and I didn’t waste time getting on deck to the display of ions bending around the earth’s magnetic pole. At first, I didn’t see anything; they were really dim. Then these ghostly wisps caught my attention. One, brite-ish, green flare became distinctive while the rest looked like a faint, undulating, green dust cloud. I took a few moments to relish in the new (to me) experience before returning to work below deck.

We are at the point of the trip in which fatigue and tiresomely close quarters challenges our ability to maintain amiable dispositions. Simple entertainment is becoming more important for keeping our spirits and energies lifted during the twelve hour watches. The accompanying photos give some examples. 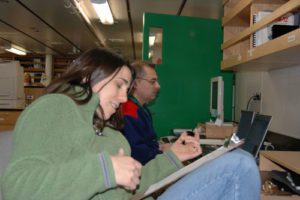 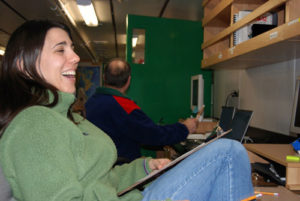 We have taken to putting on music while the CTD descends at the deeper stations. Victor Shen (Raytheon’s Electronic Technician) and I discovered that Michael Schroeder (Alfred Wagner Institute) plays a mean pencil-stick air drum to Santana. In the first shot, I am just cracking up about my newly discovered instrumental watch-mate; then I started accompanying him on air guitar; shortly followed by a return to concentrating on the data recording tasks at hand. I like the poetic framing of watch supervisor Bruch Huber (Lamont) in the doorway watching over his crew. (This frame doesn’t do justice to Bruce’s participation in the short-lived jams that we have, but it does add to the humor of the scene).

The last shot is of the photographer Victor Shen, as he watches the “soak” screen after the CTD is first placed into the water and we are waiting for the measurements equilibrate. I took this shot to demonstrate other ship-board entertainment activities. The photo that is stuck to the computer is a clue that my roommate, Raytheon Marine Technician Lilly Glass, left for the other Raytheon Electronic Technician, George Aukon. She distributed seventeen photos around the boat of George’s coffee cup, each one showing a different location where he would find a new photo to continue the treasure (coffee cup) hunt, and we joined him in laughing while helping him guess at the location of the different images. (I’m not sure how many images George found, but Lily returned his coffee mug before the game soured with frustration.) To the left of the computer is a pencil holder that was specially made by Victor for yours truly. You see, I have developed a fetish for really sharp number two pencils. One day, the CTD was nearly at the bottom, I had to record some information, someone else had my pencil, and there were no more around. I stole my pencil back to make my recording and hollered for someone to get some more pencils (in an overly dramatized, “woah is me” way). The next day, this pencil holder showed up full of beautifully sharpened pencils! Victor had cut an Expendable Bathy Thermograph (XBT) canister in two and Bruce had filled it with extra sharp pencils. It was a great gift! Finally, even further to the left, the clear water bottle is one that I fill with hot water before every sampling session so that my team can use it to warm their hands after immersing their fingers in water that is below or around the freezing point of fresh water.

To say that we don’t miss home, that we could care less about the lack of fresh vegetables and that we enjoy getting woken up from precious sleep for fire alarms would be a lie; but we’ve built a sort of secondary family out here to watch over each other, and we relish in the small moments of entertainment (air guitar to Santana) to sustain our spirits and keep our minds engaged in the science objectives.

More science news shortly, for now…I must return to work!

p.s. I forgot to mention the sighting of an Antarctic Tern. At least, I am 90% sure that it was the Antarctic Tern and will be 100% sure if someone confirms that the Arctic Terns have all flown north by this time of year. Other than that…not many birds of flight.