We finally found an ice floe large, thick and icy enough to install an ice buoy and take sea ice samples. Up to this point, the larger ice floes that we have seen were so weighed down by snow that the sea ice layer was pushed down enough to hazard flooding by sea water. The buoy, a ten foot tall pole with enclosed instruments at the base, is anchored to sea ice by large metal screws, so a solid ice layer is important for securing the instruments. 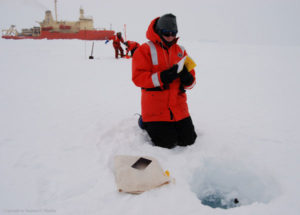 I suited up in a full body, insulated, floating, orange suit to help document the activities on the floe. Our transport onto the ice floe looked like a circular, legless trampoline that was dangling from a crane by ropes that were drawn to a point some 15 feet above the circular base. We loaded the center of this personnel basket with gear and stood on the outer metal rim, clutching the ropes for support, as the crane picked up the load and dropped us on the sea ice, four at a time.

Michael Schroeder (Alfred Wagner Institute) was in charge of installing the ice buoy for two of his colleagues, Christian Haas (Alfred Wagner Institute) and Steve Ackley (University of Texas), who are interested in the movement of sea ice off the coast of Marie Byrd Land. Every hour, the buoy will transmit sea ice position, ice temperature, air temperature, and air pressure to the ARGOS satellite for these scientists to monitor the location and state of the ice floe for as long as the floe stays frozen and afloat-which is anticipated to be longer than one season and hopefully longer than a year. We expect that the floe (and buoy) will head west before either recirculation back towards the east or continuing west to the Ross Sea; however, the uncertainty in where the buoy will end up is the reason for placing it on an ice floe to begin with. Generally, ice moves at a forty-five degree angle to the wind direction (another result of the Coriolis force, which I mentioned earlier), but when ice is packed into a sea ice floe then its motion becomes constrained by other forces and is less responsive to the direction of wind. Christian Haas and Steve Ackley will use this one buoy as part of a much broader effort to better understand the movement of sea ice in this region.

In the photo (above), Katie Leonard (Lamont Doherty) measures snow depth, snow temperature and ice temperature to provide a complete set of information on the conditions in which the buoy was deployed. While Katie’s Ph.D. project isn’t directly involved in the research that motivated the buoy deployment, her research background has given her a lot of experience in sampling snow and ice. For her project, which investigates the transport of snow off the Antarctic continent, Katie has participated in extensive field work on the Ross and McMurdo ice shelves. The photo shows her adeptly used her experience to record the conditions on the ice floe while Jeremy Lucke and Michael Schroeder wrestle with the buoy in the background, sinking the base into a pit that they had dug down to the ice surface. The buoy was then further anchored by three lanyards. 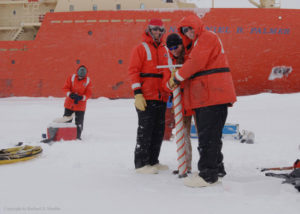 By the time I caught up with the group, the work was mostly done. Amy was cutting her core into 10cm sections and placed each section into specially marked sample bags. She has a very infectious enthusiasm for science and is quick to get her hands dirty, literally. Even in Antarctica, she manages to work without gloves, collecting her sediment, sea water or ice core samples for extended periods of time with little regard for reddened finger tips. Behind a microscope, she will later look at these samples more closely to determine the types and species that live in the ice, sediment or sea water. It’s a very specialized field, and she admits that there are few people in the world that have an interest in doing the type of work that she does. After all, the effort of classifying species is an arduous task that takes an incredible amount of patience. For Amy, however, it seems like a game of playing detective: She searches for clues as to where and when different species appear, and she uses her knowing of species’ environmental preferences to assess changes in ice cover, circulation and climate.

Brice’s motivation for the ice cores is quite different. Instead of assessing the biology in the ice, he is interested in atmospheric byproducts of modern society to gain insight to ocean circulation. The idea is that atmospheric gases become dissolved in sea water when the sea water is at the surface of the ocean and in contact with the atmosphere. As soon as water sinks below the surface, and is no longer in contact with the atmosphere, the chemical properties of the dissolved gases that are non-reactive, or inert, and unused by biology can only be changed through mixing with other water masses. In this case, Brice is analyzing concentrations of Sulfur Hexaflouride (SF6) and Chloroflourocarbons (CFCs). SF6 is a highly non-conductive (insulating) gas that is used to prevent electrical arcs from occurring in high voltage situations and it has been slowly leaking from urban areas into the environment. CFCs, on the other hand, were banned in the 1990s for use (e.g. in air compressors and propellants) but are still a useful research tool for oceanography.

Oceanographers gain insight to ocean circulation by understanding how long water has been below the sea surface, and we refer to “young” water masses as those that have had recent contact with the atmosphere. The “oldest” water in the deep ocean, which has been out of contact with the atmosphere for around 500 years, will not have a signature of these inert gases because the atmosphere did not host these manmade chemicals at the time that the water sank from the surface. As a result, differences in the seawater concentration of these chemicals can help us determine the amount of time that the sea water has been circulating below the surface or the amount of mixing between water masses.

For most of the cruise, Brice, Bettina and Chris have worked together diligently to sample the oceans for these trace gases and other complimentary information. Back at Lamont Doherty, Brice will use this data to assess the formation and distribution of water masses in this region. However, his study relies on the ocean’s exchange of gas with the atmosphere, and in this region sea ice may form a barrier to the atmosphere. As a result, the sea ice core analysis will help Brice understand whether sea ice has a large or small influence on the ability of the seawater to uptake the gases of interest. In an environment so dominated by sea ice, this type of measurement is critical for analyzing the meaning in the ocean water concentrations.

Helping with the deployment was an exhilarating excursion off the ship. Although it was snowing with a temperature of around -10C, I was perfectly warm in my orange flotation suit. It was a new experience for me to walk on floating ice. The ice was more than two meters thick and at a minimum 3 nautical miles wide, but I was still a bit disconcerting to be walking on a frozen platform that was just formed over the past year. By the end of the sampling time, I had gained a good bit of trust in its stability.

There is one more ice buoy to deploy and more ice cores to extract. In the meantime, we’re continuing with CTD stations and making our way back west to sample along the Getz ice shelf before returning to our eastward course.