We recovered a mooring this morning. The satellite images may show ice free seas in our area, but we’ve found lots of new ice formation. As we made our way towards the mooring location, we began in open water that only had a thin and barely perceptible layer of ice that was only in disconnected streams (Grease ice). The ship then entered an environment where the surface waves were damped by a blanket of ice platelets that gave the appearance of slush (Shuga), and we soon transitioned into seas where the ice platelets became more pronounced, forming small (~5 inch diameter) pancaked-like ice mats (also Shuga); the platelet ice solidified further to cap the sea with a thin layer of plastic-like (yet brittle) ice that was only broken by the bow of our ship (Nilas), ending in a thicker (around 3 inch deep) layer of ice that was also unyielding to waves but easily crushed by our bow. It was in this three inch blanket of Nilas ice that we searched for the mooring, hoping that the small green floats that buoyed the mooring to the surface would also be able to penetrate the icy ceiling with their buoyancy force alone. They didn’t. As we maneuvered slowly through the Nilas in search of the mooring, I finally spotted a faint green hue in an otherwise blue-grey covering once we were nearly on top of the darn thing! Having found the mooring, it was only a matter of moments before it was safely on board.

We are now traveling in the direction that we entered the Pine Island Glacier area. Any talk of circling around and exiting the other side of the bay has been quieted by the reality that the ice coverage is probably worse than what can be spotted by the big NASA birds above. Although this ship could make a passage through it, our time is thought to be better spent collecting samples elsewhere. Besides, we have successfully sampled some important regions, and the science mission here seems successful (at least as far as I can tell).

I should make haste now to send some photos! 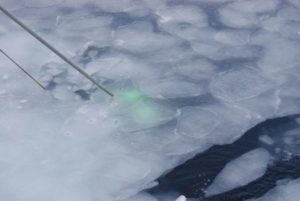