We have a short break as we transit towards the PIG (Pine Island Glacier). In case I have to dash off to work, here is a brief summary of the past few days: CTD stations.

Yesterday, we only had two, which was a stroll in the park compared to the 4-5 CTD stations, the additional sediment grabs, and the mooring recoveries (not on my watch but participated in nonetheless) that we had been doing in the few days prior. The sampling stations have been close together. Typically, the CTD will come on deck, we’ll sample the water, and by the time we’re finished the bridge announces over the radio, “15 minutes until next station,” and the process begins again. 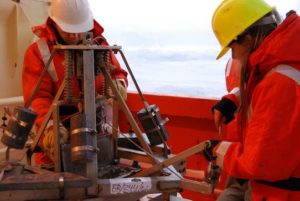 One might think that short distances traveled over space would equate with similar data, but that’s not always the case. It seems that more often than not, I will be surprised at just how much can change in the currents over just a short distance. This happened the other day, when we only covered around 2.5 nautical miles between stations. I thought that I would be looking at the same profile, but instead the profile revealed a different stratification. It’s truly amazing!

In my time off watch, I have found myself engaged by a couple of recent scientific articles and observing or photographing surroundings.

A couple of days ago, I headed towards the bridge to collect my thoughts after watch. Sometimes the bridge can be very busy, but on this occasion it was a quiet refuge. We were sampling the ocean in front of the Dotson Ice Shelf (approx. -112.5°E, -74.5°N). The day was sunny, the waters calm and smooth, and the ice shelf glistening. I had written a couple of lines in my journal when I noticed a change in the ocean that I hadn’t seen before. It struck me as odd, so I took some pictures and went below deck to find either Bruce Huber (my watch supervisor) or Stan Jacobs (the chief scientist of the cruise). 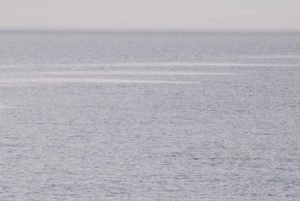 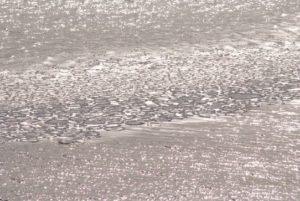 I found Bruce preparing for the next station, and chatted with him while he worked. It turned out that this surface manifestation of ocean circulation (most likely wind driven) had been spotted up and down the ice shelf, but the cause for it wasn’t clear. I left Bruce with his work and ascended to the bridge again to continue writing.

Stan Jacobs was there when I returned. He didn’t seem to mind my asking about the observation, and he responded with more questions. We stood together looking out over the ocean and ice shelf and passed back and forth ideas on the cause for the various things that we could see around us. It was enlivening to discuss the “knowns and unknowns” of our environment as we peacefully scanned the ocean. For a chief scientist, whose attention is demanded for the entire cruise operation, time is precious, and I appreciated the moment together. Shortly thereafter, a voice came through the radio to announce a problem that needed troubleshooting; Stan’s attention immediately returned to cruise operations.

The next few days should be as lively as the last. The low pressure system that I spoke of in my last entry continues to linger and doesn’t appear to be going anywhere soon. This is welcomed news as it has meant that over the past few days the winds have come from the south (southwest to southeast). With the winds encouragement, the ice seems to be giving way to allow passage towards Pine Island Glacier. The ice doesn’t simply move in the direction of the wind, but moves 45 degrees to the left of where the wind it blowing; in our case, this means that not only is the wind helping to clear our way to Pine Island Glacier but it is also helping to thin the ice where we plan to leave the embayment.

Both the movement of the ice (45° to that of the wind heading) and the change in wind direction with the passing low pressure system (mentioned in my previous post) are consequences of the way in which fluid moves on a rotation system. If you have ever tried to toss a ball to someone on a merry-go-round then you may be familiar with the problem. If you have not played catch on a merry-go-round recently, then perhaps you can imagine the scenario: Because the merry-go-round is rotating, you need to toss the ball ahead of the person who is opposite you on the merry-go-round so that the ball doesn’t miss them as they
continue to rotate in a circle. If you were to ignore the rest of the world and just focus on the merry-go-round, then the distance between two people would be a straight line and the ball would appear to curve as it is tossed between the two people. Since the oceans and atmosphere aren’t glued to the earth’s surface, the same type of thing happens as these fluids move over the earth’s surface: From our perspective on this rotating sphere, the air and water appears to move in arcs rather than in straight lines.

For now, both the weather and the Coriolis force are acting in our favor. Unfortunately, the dropping temperature is another beast to contend with. Winter is setting in and with it comes newly forming ice. As I write, the ship is passing through a thin layer of new ice that breaks easily but disrupts the signal of the instrument that is continually gathering data on bottom topography (a multibeam sensor). This ice brings new designs to the sea surface, often times looking like entwined fingers as two layers get pushed together and overlap. Unfortunately, this newly formed sea ice is mostly invisible to satellites, so you won’t be able to see it from your perspective. For us, this sign of an advancing winter is a reminder that we ought not to linger for too long in this embayment!

We are fast approaching this next CTD station, so I should sign off. 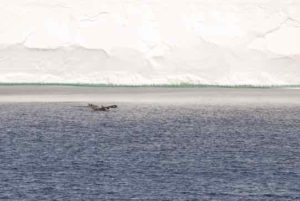