The barometer reads 980, having fallen around 10 mBar since yesterday and showing signs that the low pressure on the satellite images found its way to our location. In the southern hemisphere, a low pressure system circulates clockwise (counter clockwise in northern hemisphere) so the winds are now blowing from the east, and we hope that they will soon blow to the north (as the low continues to head eastward) and help to free more sampling locations of sea ice by blowing it offshore. However, reality if often different than textbook examples, so we’ll have to wait to see if the progression of the low is as expected.

The low pressure system changed my port hole view to a thick gray that can be sensed with more than just the eyes. There was no sparkling sunrise this morning; the sky just gradually lightened as we brought our CTD up from the depths at around 2am (ship time). Twenty four hours ago, I had considered wearing my sunglasses while working at my computer, as a brilliant day of sunshine penetrated the port hole above my workstation enough to make me squint.

When I came on watch yesterday, clouds only hung on the horizon, enough to infuse the sky with color as the sun arose. As I discovered, Antarctica sunrises are nice because…they…take…so…long…. There is plenty of time to register in a sleepy mind “oh…a sunrise” and then walk in slow motion to get a camera (perhaps a coffee) before ambling back on deck and sipping the coffee while watching the thin sliver of orange that is lining the clouds give way to a glowing orb. The simple pleasure of enjoying our surroundings in between stations and work has yet to tire.

Unfortunately, while the sunshine lifted our spirits, the sea ice frustrated our sampling efforts because it slowed transit speed and deterred us from reaching certain sites. After having relatively calm seas in the sea ice, the shuffle through the thicker pack ice jarred our sense of equilibrium. At one point, the ship heaved to one side as she was hoisted on top of a 4 m thick slab of snow and ice to settle awkwardly at an 8+ degree tilt to starboard. Looking out from my workstation port hole on the starboard first deck, the view of a freshly cut wall of sea ice confirmed the roll that my inner ear had already perceived.

It’s slow going to continually push through a patchwork of ice that is overly burdened by snow. The Palmer’s bow butts up against and onto the pack ice, and the vessel slows to a stop. If the ice doesn’t give then we have to back up and ram it again. With two or three attempts, a crack in the sea ice spreads from the bow and widens with the ship’s persistent encouragement. We make it through to repeat the process on the next patch, over and over until we reach a lead of open water. 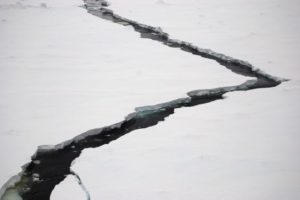 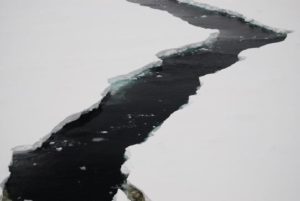 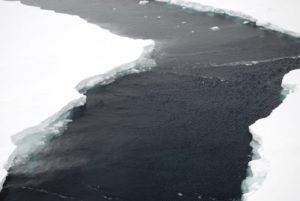 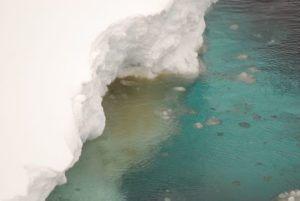 This region gets more sea ice than the Weddell Sea, and I have been told that the thickness of the snow is unusual for sea ice. Our sampling region is more burdened by sea ice than we had hoped, so we are resigned to slowly make our way through the thick pack ice. Yet within the last couple of hours, true to the speed with which things can change around here, we seem to have made it to open water again and are speeding towards our next station at 10 knts. over ground.

In fact, we’ve arrived at station…time to work!