Our first sunset came yesterday evening with a blaze of fiery colors. I suppose that I should say it was the night before last, but I watched the colorful scene as my sunrise, having just woken up; so it feels to me as though our first sunset was yesterday. The change from having midnight light stream through portholes to simple darkness seemed to happen rather quickly. One night it was light, the next…a sunset! I suppose it shouldn’t come as too much of a surprise. The winter season is closing in on us and we have traveled north by about five degrees over the past few days. We are still further south than we were at Cape Adare, but I suppose that the season’s progression has caught up with us. 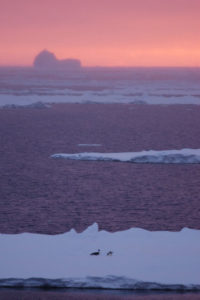 Picture is of our first sunset. The penguins are
resting on sea ice while a large iceberg looms in the distance.

For the moment, sampling is on hold as we passage towards the Amundsen Sea, and we’re all catching our breath (a.k.a. sleep) before the next round of stations. There are a lot of interesting people and research projects onboard to keep us entertained in the meantime: A couple days ago, George Aukon (Marine Tech.) gave a presentation of rafting in Siberia; yesterday, Amy Leventer (Colgate University) gave a science overview on the distribution of single cell algae in the surface water along our cruise route; and today, my cabin mate, Lily Glass (another Marine Tech.) is going to give a slide presentation on living in Mongolia. In an intimate conference room with comfortable seats, these gatherings are a neat way to enjoy our time together.

The weather is finally giving way to brilliant sunshine after ensconcing us in clouds for the past few days. Our scenery is changing as well. A few days ago, we traveled through pack ice around 1 meter thick and varying in footprint size from that of a refrigerator to that of a house. I stepped out onto deck to a setting washed in grey tones. In between the pack ice, the sea state was glassy flat; waves were damped by a thin layer of freshly formed sea ice that coated the surface with a yielding yet smooth gloss. The falling snow blocked most of the sun, although a hint of it percolated through the clouds to reflect on the blue-grey surface of the new ice.

As we moved away from pack ice, this landscape gave way to a variety of icebergs. I should clarify that I am less familiar with this territory than most of the science party, so I rely on them to adeptly correct my misuse of jargon. For instance, an iceberg is technically as large as or larger than a city block and towers more than five meters above the sea surface, shadowing its smaller companions that are referred to as either bergy bits (if one to five meters above the sea surface) or growlers (if less than one meter above the sea surface); hence, more accurately, we have seen a variety of bergy bits, growlers and icebergs, none of which are technically sea ice-even though they float in the sea-because they broke off of ice shelves and were not formed by freezing seawater. Therefore, even more accurately, we have ventured out of the sea ice and are now floating among the ice giants and dwarfs that include bergy bits, growlers and icebergs. Finally, and most thankfully, contrary to the premonition of rough seas, the water is calm.

May your weather be warmer, your sunsets as beautiful and your work as engaging…