The first few times that someone used the “p” word, everyone within earshot clambered to the nearest porthole. Some people grabbed cameras and sprinted topside. It didn’t matter how far away the penguins were, cameras clicked away to document the occasion. Flash forward fourteen days. We have traveled over 2000 nautical miles to the northwest Ross Sea and back again, we have steamed east along the ice shelf, and we have made our way through pack ice. My watch ended yesterday with the last CTD station in the pack ice before we embarked on a path to the Amundsen Sea via rougher water in the open seas.

The sea ice has posed problems for our science objectives; sample locations we had wanted to visit were blocked by a thick and impenetrable ice cover. Using the most recent satellite images that we could receive onboard (near real time for more coarse resolution data and up to 4 or 5 days for finer scale and more accurate data), Stan Jacobs worked with the captain to make alternative sample plans that evolved with the ice pack. As we pushed and broke our way through the sea of around one thick meter sea ice, we seemed to crash the party of more than one wildlife gathering.

Being in the pack ice, we passed many seals (Ross and Crabeater) and penguins (Adelie and Emperor) as they rest on various forms of ice. Pretty soon, the response to the “p” word faded to a simple nod of acknowledgement, indicating: I’ll first finish what I’m doing and then meander to the porthole to see the penguins.

We haven’t seen huge colonies of penguins. The Adelie gatherings reem to range from 1-10. Sometimes these small groups are separated by very short distance, like kids in small groups that are scattered about the schoolyard. The personalities of the Adelie and Emperors seem strikingly different as well. The Emperors are more often in groups of 2-3 and simply stop and stare as they take in the information that a large, orange and very strange looking object is rumbling towards them and crushing the platform that they find so solid. If we get closer than their comfort level, they flop onto their bellies in a somber “oh…all right…” fashion and toboggan away on their bellies at a speed indicating annoyance more than fear. Adelies, on the other hand, seem to interpret the Nathanial B. Palmer as the apocalypse. Even when we are quite far away, they flap their “wings” and excitedly dance in circles before falling to their bellies and tobogganing away at impressive speeds. In either case, as the penguins push themselves away from the ship, their trails are forged through a layer of snow that blankets the sea ice.

Pretty as the snow may be, it can cause more problems for science than one might anticipate. Snow coverage varies in the different regions of Antarctica. In some areas, the surface of sea ice is actual ice and there is very little snow covering the ice. What we have been observing on our trip are thick layers of snow covering the ice. In fact, in some cases, the layer of snow makes up most of the sea ice that is observed above the surface. We have been trying to find a place to put an ice buoy on the ice floe; but we have found it very difficult to find a piece of sea ice in which the instruments could anchor to ice instead of snow, which is less stable than ice. 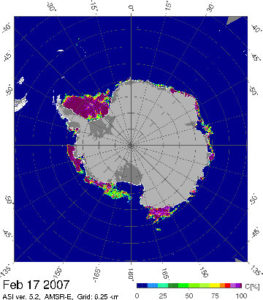 Snow also poses a challenge to satellite measurements that use ice thickness above sea level to gage the amount of ice below sea level. The idea is that we can apply Archimedes Principle to use information on the density of ice together with the elevation above sea level to calculate the draft of ice below sea level. In other words, the weight of an ice floe equals the weight of the water that it displaces, and this information can be used to determine sea ice draft. Snow is less dense than ice but is hard to distinguish from ice in satellite observations. As a result, calculations of ice thickness and draft can be skewed if there is a thick layer of snow over ice and if one assumes (as we are often forced to) that the density of mass above sea level is that of ice.

Another science hazard that is introduced by snow is inaccuracies in the estimates of whether ice sheets are growing or shrinking. Katherine Leonard is another graduate student on this ship, and she is investigating this very topic. On the ship, she has carefully rigged a snow counting device to calculate how much snow fall we are encountering on this passage. When we were close to the ice shelf, and it wasn’t snowing, the apparatus was detecting the amount of snow being blown off the top of the ice shelf. This drift of snow was a visible stream that blew off the shelf and dispersed over the ocean.

These scientific challenges further demonstrate that things are rarely as straightforward as they may first appear. A simple indentation of snow that trails behind a penguin as it toboggans exposes a new layer of complexity to our task as scientists in understanding the nature of this environment.

The Nathanial B. Palmer’s next challenge is to navigate to the Amundsen Sea where we will find our way through breaks in sea ice, looking for good sampling locations that will not compromise our ability to reach open ocean should the weather change and turn the sea ice into a locked and unmovable grid. 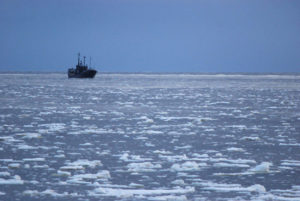 The Farley Mowat searching for whaling ships. Picture taken a week ago near Cape Adare.