The bridge of the Nathanial B. Palmer was busy with scientists and crew scanning the water with binoculars for a set of yellow buoys. Radio contact between the bridge and the science lab confirmed that we were in the vicinity of an anchored a set of instruments (mooring) that had been installed in 2004—continually monitoring current speeds, temperature and salinity ever since. Bruce Huber had already established contact with the instruments by exchanging coded acoustic signals with an instrument on the mooring that is referred to as a release. The signals returning from the release indicated that the commands to release the mooring from the anchor had been received. Bruce was eager to retrieve the instruments and learn from their three-year record, and his excitement was contagious; even those who weren’t on watch gathered in anticipation.

Upon being released, the mooring was expected to float to the surface and be marked by buoyant, yellow buoys. We waited. Nothing happened. Anticipation gave way to frustration for not really knowing why the mooring was not surfacing. Bruce recounted another occasion when a mooring surfaced with heavy biological growth around one of the components, but in this case we could only guess why this mooring wasn’t surfacing.

Out at sea, years of planning and preparation can wash away in an instant as nature continually adds different and unexpected dimensions to problems. Careful planning and preparation helps operations succeed, but inevitably there are always surprises, compromises, and adaptations that need to occur in the field. Whether driven by failures in instruments or bad weather, a science plan is always evolving to adapt to different circumstances. In this case, we decided to attempt a manual recovery by hooking and dragging the mooring up to the surface; but we would first drop a few CTD casts to gather current information on the water conditions.

It had only taken us a couple of days to travel to Cape Adare, a stones throw away from McMurdo Station as far as Antarctic oceanography is concerned. The main objectives of NBP0702 are in an area east of the Ross Sea, so the passage to the northwest sector was a bit of a detour; but the tasks of recovering and re-deploying a mooring, taking a few CTD casts and deploying a new mooring at Cape Adare required a short enough time on a research vessel that it was logistically advantageous to merge the two science efforts. Of course, even though the two research objectives are different, the science goals of the two projects are similar in nature; both projects aim to better resolve changes in ocean circulation and the distribution of currents.

To begin with, the complex network of currents that make up our oceans vary in space, time, size and strength. Those that originate in the tropics tend to be warm and salty because of the heating and evaporation effects of the sun. Warmer temperature water is less dense than colder water and saltier water is denser than less salty (fresher) water; so differences in temperature and salinity establish differences in density, which means that the layers of currents in the ocean tend to have different origins. By sampling the ocean’s temperature and salinity, we can begin to understand how water of different origins travels through the ocean. In the Antarctic, ice-ocean interactions dominate density changes such that changes in density are largely driven by changes in salinity and the temperature effect is comparatively small. The motivation for the Cape Adare project is to better understanding the origin, formation and variation in the bottom most water that circulates in most of the world’s oceans, a mass of water referred to as Antarctic Bottom Water. Stan Jacobs, on the other hand, will address how an intermediate current in the Amundsen and Bellinghausen Seas moves onshore to interact with ice shelves and contribute heat for basal melting.

In general, the deepest currents in the world are of Polar origin; in these cold environments, salt is released to the ocean during ice formation when the water molecules freeze into a matrix that expels the salt. The ambient water is thus extra salty and is cooler than the freezing point of fresh water. The combination of salty brine and cold temperatures creates dense water that sinks while being replaced by the nearby surface water. This process occurs at locations that have a variety of surface salinities, so the resulting currents can have a range of salinity, temperature and density.

Back on Cape Adare, we floated in anticipation of recovering data that may capture the transition of the coldest water mass on earth from the shallow waters of the Ross Sea into the deep ocean. Cape Adare is a good natural laboratory for this transition because it’s close to McMurdo station and typically has less summer sea ice coverage than other study sites, making it more accessible by ship. On this occasion, we were retrieving the mooring from an earlier study called AnSlope (Cross slope exchange at the Antarctic Slope Front) and initiating the instrument deployment for a follow up study called CALM (Cape Adare Long-term Monitoring project). AnSlope data indicates that the Antarctic Bottom Water is channeled by topography to the region where the 2004 mooring resided and where the new mooring was going to be placed, making it an ideal place to monitor changes in the current.

After a frustrated attempt at recovering the 2004 mooring, we set off to gather a series of CTD profiles as well as deploy another mooring; but soon the weather began to foul. After only three CTD stations, the worsening sea state forced another change in plans. We hastened to assemble and drop the new mooring before the conditions became too bad. As the storm progressed and was predicted to worsen over the next 36 hours, the deck became an unsafe working area, and we were forced to continue on with our research cruise, postponing the mooring recovery another year and abandoning the idea of dropping more CTD casts.

We quickly switched gears while heading back to the Ross Island area and commenced the next phase of our journey: tracing sources of water that is cooled by the interaction with ice shelves. Hence, while the first study in the Cape Adare region focused on how Antarctic Bottom Water is transported into the deep ocean, this leg of the journey focuses on how currents are transported onto the continental shelf to interact with ice shelves. The challenge is that water masses are always evolving, mixing and changing. Even though certain characteristics of temperature, salinity and density seem to stay the same in time, those too are subject to change. Our job is to determine how different water masses are modified in space and time. In the Amundsen and Bellinhausen Seas, we will capture a snapshot of how ocean circulation is affecting the ice shelves and ice shelf stability at this point in time.

The societal importance of ice shelf stability is described in this website’s introduction and can be summarized as follows: An ice shelf collapse won’t in itself cause sea levels to rise but may increase the speed at which land ice is transported to the ocean, which would contribute sea level rise. Traditionally, calving ice bergs are thought to be the largest contributor of ice shelf degradation, but literature suggests that 70% of the West Antarctic Ice Shelf attrition is due to melting from ocean-ice interactions (Stan Jacobs, personal communication, Feb. 9th, 2007). With more data, we hope to better constrain the uncertainties in mediating effect of the oceans on ice shelf thickness.

For now, we are steaming toward our primary research site and gathering data as we travel. An ice-free sea and functioning equipment will be our best allies in collecting informative and accurate data; but nothing is taken for granted out here, and we will strive for the best information under whatever conditions are presented. In the mean time, with such different backgrounds united in one environment, this cruise gives a unique opportunity to learn about different fields and different facets of the problem. We have already had a couple of science talks on board, and others are being put together. In the end, the value of this cruise will not simply be the data that is collected but will also be weighed by the amount of learning through shared information and the enrichment of collaboration. 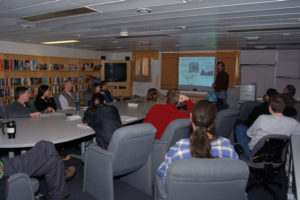