Hello again from down south! The weather has finally started to live up to my expectations of Antarctica: rough seas, wind sprayed whitecaps, and an icy nip to the air. The N.B. Palmer is eating it up! Riding solid and stable, she feels as if we are in just a wee bit of ocean swell, and I have to look out my port hole to remind myself that the weather *is* really crappy (albeit not too crappy. “only” 15-20 ft. seas and 40 knot winds that are gusting to 50 knots). The lack of landscape or wildlife combined with this new rocking lullaby has been good for me: I finally got a much needed 7 hrs. of sleep and went back for another 5! The 24 hrs. of sunlight combined with cool things to see had wired my brain to keep me awake, so I really needed this storm to get some shut eye (and thankfully, I don’t get sea sick). 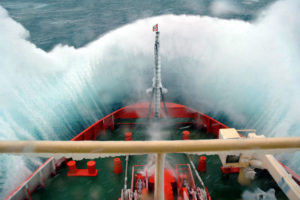 Yesterday’s watch was our first watch of active sampling. We started with a series of CTD stations forming a straight line from the coast out to sea and ended with the excitement of installing a set of instruments on the bottom of the ocean (aka a mooring) while waves splashing over board, bergy bits floating by and a flock of Antarctic Petrels circled around us. Dare I say…it was epic!

I arrived on watch after only a couple hrs of sleep and was tasked with operating the computers to control the sampling. Thankfully, my watch companions helped me along, and we were able to sort out a smooth sampling routine in no time. Of course, I first managed to give everyone a laugh by broadcasting over the radio my response to the question of whether I could do the bottom sounder test. I asked: “Which button do I push, the big red one?” To which a radio voice replied: “Victor, you’re needed in the dry lab.” Yep…that’s me…just trying to help with moral by providing a bit of humor. (For the record, though, it WAS the big red button!) 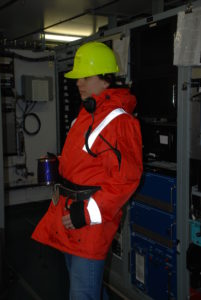 In any case, watch was a busy twelve hours of nearly continual sampling and (for some of us) learning radio speak. The time passed quickly, and it was fun to move between computer monitors, instruments, and TV screens. Each time the CTD moved down, we could see the masses of water below and were witness to their evolution as we changed locations. When the equipment came on deck, I was the “water cop” and orchestrated who could sample what and when. Then, of course, there was the fun of working in the field. At one point, some of us were watching a live video feed of the equipment coming back onboard when we saw a large wave completely douse Jeremy Lucke, the Marine Technician (MT) who was standing by the door to help bring the CTD inside.(Everyone who was dry behind the TV screened uniformly chimed “dohhh!”)

Towards the end of my watch, I was asked to help with the deployment of a mooring, which will float above the ocean floor (but well below the ocean surface) and will continually monitor temperature, salinity and currents. Of course, the chance to be out on deck in such “nice” weather sounded great, so I jumped on the opportunity. What a blast! The swell and wind were definitely picking up, which made the operation a bit of a challenge, but we successfully deployed the instruments in time, before the real foul weather set in, and it was quite a thrill to be on deck and getting wet as waves splashed over the rails.