Notes from the bridge of the Nathanial B. Palmer.

We made it to McMurdo! The arrival yesterday afternoon was tentative. We had been told that weather may boomerang us back to New Zealand, even after making the ~4hr flight to Antarctica. As we neared the continent, we held our breath for a landing, especially after hearing that one trip had to boomerang seven times before successfully landing! Each day they boarded the plane, like us, and headed to Antarctica, but (unlike us, thankfully!) they were forced to return to New Zealand, with a possible 8 hour round trip each time: Thus is the nature of landing an aircraft in a dynamic and extreme weather system. 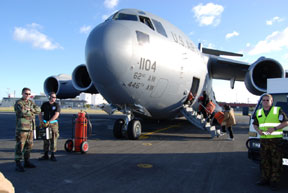 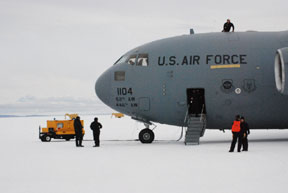 Of course, there are no windows in the belly of the cargo jet, so we had to rely on the feel of the aircraft to gage the progress of landing. At one point—after an initial, rapid descent—the nose of the aircraft pitched upward, and we started to ascend again. A few worried glances and shrugs were passed between us before the nose returned to a downward angle, and our faces returned to smiling about the landing. We could only guess when the aircraft would touch down and how close we were to land. When we finally felt the impact of the wheels touching down, I was struck the overall smoothness of landing on the ice shelf. This feeling was my first introduction to the dynamic network of runways and roads that have been smoothed by grooming to eliminate the imperfections of the ice.

The whole operation is quite impressive. The Ross Sea ice shelf hosts two aircraft landing sites, each groomed for different landing equipment (wheels and skis). Wheels need hard packed snow to land on, but skis need icier snow pack for landing; hence, the different runways. Because the runways are on floating ice, they migrate as the season progresses. As we made our way from the floating ice shelf to the island on which McMurdo station resides, an experienced McMurdoian pointed out a de-commissioned runway as a closed road leading more directly back to McMurdo, both over more seasonal ice pack and both closed due to ice break-up. The runway we landed on was very stable, however, with an ice thickness of ~80m and close to the grounding line of the ice shelf. 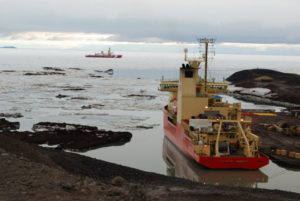 We are docked at McMurdo until 8pm tonight, at which point we will move offshore so that the re-supply ship can take our place. I am hoping to do a cross country ski trip with my new shipmates before then, taking advantage of our last minute land time. The ship still needs a couple days to prepare for the journey, so we’ll just sit offshore in the ice pack for a little bit of time before heading to sea. Our company will be a coast guard vessel that travels back and forth along the ice shelf channel, preventing thick ice from forming that would block our exit route.